What are is a “web server”? The term can refer to the hardware (the computer) or the software that runs the World Wide Web. This page has a list of the most popular web server software available in the market today.

And what does a web server software do? Well, in simple terms, it serves web pages. Each time you open a web page, the browser program on your computer locates the server and then makes a request. The web server sends the page back to your browser along with images and other multimedia content it may have. FYI, your browser is known as the “client”.

For further information, refer Web server comparison on Wikipedia and Basic web servers on the World Wide Web Consortium web site (this list is outdated – that’s why I have this article.

The Apache Tomcat has been developed to support servlets and JSP scripts. Though it can serve as a standalone server, Tomcat is generally used along with the popular Apache HTTP web server or any other web server. Apache Tomcat is free and open source and can run on different operating systems like Linux, Unix, Windows, Mac OS X, Free BSD.
Apache Tomcat

IIS Windows Web Server has been developed by the software giant, Microsoft. It offers higher levels of performance and security than its predecessors. It also comes with a good support from the company and is the second most popular server on the web.
Microsoft IIS Windows Web Server

Free open source popular web server including IMAP/POP3 proxy server. Hosting about 7.5% of all domains worldwide, Nginx is known for its high performance, stability, simple configuration and low resource usage. This web server doesn’t use threads to handle requests rather a much more scalable event-driven architecture which uses small and predictable amounts of memory under load.
Nginx web server

Jigsaw (W3C’s Server) comes from the World Wide Web Consortium. It is open source and free and can run on various platforms like Linux, Unix, Windows, Mac OS X Free BSD etc. Jigsaw has been written in Java and can run CGI scripts and PHP programs.
The Jigsaw web server software from W3C

Klone, from KoanLogic Srl, includes a web server and an SDK for creating static and dynamic web sites. It is a web application development framework especially for embedded systems and appliances. No additional components are required when using Klone; thus, one can do away with an HTTP/S server or the active pages engine (PHP, Perl, ASP).
Klone web server

Includes two web server options with reverse proxy and caching solutions that lead to quick serving of web pages and easy handling of even the most demanding http traffic. The iPlanet Web Server, for example, is a high-performance server with enhanced security and multithreaded architecture that scales well on modern 64-bit multiprocessors.
Oracle Web Tier

The cross-platform X5 from iMatrix Corporation is the latest generation web server using the company’s own multithreading technology (Base2) that makes it scalable to multi cores. As per the iMatrix, X5 can handle thousands of connections without difficulty and thus is useful for long polling in which connections from clients remain open for extended durations.
X5 (formerly Xitami) web server

If you run a web site and want to know which server it runs on, use the Netcraft’s What’s that site running on? Tool.

Set up and configure Apache on Windows 10 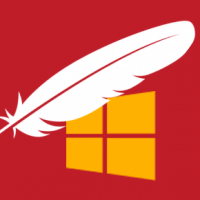 How to install Apache on Windows 10

At Amazon's warehouse, the person (picker) who locates products may walk 10 miles or more in one day. [more...]