The iPad continues Apple’s tradition of having minimal buttons on its mobile devices. Quite like the iPod Touch and the iPhone, the iPad has just 4 buttons.

The most prominent of all the buttons on the iPad is the Home button which looks kind of muted placed below the large 9.7 inch screen. Just as in other Apple mobile devices, the Home button closes the app which is open and brings you back to the ‘home’ screen. This button can also be used to take a screenshot of the iPad.

Tip: Double-clicking the iPad Home button will display icons of recently used apps in a row at the bottom. This enables you to quickly load the app you want. This is a simple and effective way to move across applications without having to go through the home screen. Though the iPad doesn’t have true multitasking, this can be consider a decent attempt towards it. On the right side (when the iPad is held straight with the screen facing the user), you’ll find the volume control buttons as a long black bar. These let you increase or decrease the volume without having to wake up the iPad and fiddle around with the same settings on the iPod app.

The switch just above the volume buttons is the iPad Screen Rotation Lock which can be changed to a mute button. By changing the settings, you can set the desired functionality of this switch. I personally prefer it to work as a screen rotation lock. By the way, if you want the mute functionality for this switch, you can still lock the iPad screen through the software. Read that post for details.

The Sleep/Wake and On/Off iPad button

The single button locate at the very top of the iPad is the Sleep/Wake, On/Off. It’s generally used to put the iPad to sleep, thus turning off the screen and conserving precious battery power. This button along with the iPad Home button can be employed to capture the display on the screen. 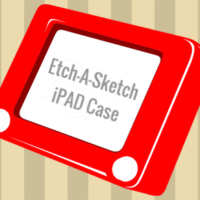 Etch-A-Sketch iPad case – but will you even notice the difference? 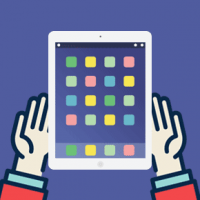 Why did I buy an iPad?