For most of us, the World Wide Web is a place to find information, communicate with friends and family using social media (Facebook, twitter…), post our thoughts on blogs (Blogger, Tumblr…), watch videos (YouTube, Vimeo…) and much more. The change this global network has brought about in our lives is astounding.

Invented by Sir Tim Berners-Lee, a computer scientist working at CERN, the original purpose of the web was to serve as a “mine of information“; that was actually one of the names given to it by the inventor. You see, Berners-Lee and his colleagues created the web primarily for easy distribution and retrieval of information. In those early days, they would never have envisaged the shape it would taken in just a few years.

We picked 15 dates and periods which, according to us, are important milestones of the WWW. These start from its birth to launch dates of popular web services and, thus, cover not just the history but also how the global network is being used by people around the world.

CERN scientist Tim Berners-Lee, along with Robert Cailliau, decides to build a “web”. They release a formal proposal according to which, the web would involve a client-server architecture and the documents (then known as hypermedia) would be viewed with a browser program.

The original proposal for a global hypertext system had been submitted in March 1989. In this, Berners-Lee had used the word “mesh” for the World Wide Web. CERN regards this original proposal as the birth of the web.

In 1993, the original site was pulled down from the web. However, a decade later, because of it’s historical significance, people at CERN started a project to restore the world’s first web site and the first web address. You can now view it at http://info.cern.ch/hypertext/WWW/TheProject.html (its URL was actually nxoc01.cern.ch/hypertext/WWW/TheProject.html). Also, the contents of the original site were not preserved and have been lost – change, after all, is the very nature of the WWW. The least recently modified web page is here. It carries the time stamp of Tue, 13 Nov 1990 15:17:00 GMT.

The second browser, Line Mode, is released by Nicola Pellow, Robert Cailliau and Tim Berners-Lee. It was the first browser that could run on several different operating systems. The WWW could now be accessed from other platforms and not just NeXT.

6 August 1991: Summary of the WWW published by Sir Tim Berners-Lee

Tim Berners-Lee published a summary of the World Wide Web project at alt.hypertext newsgroup on 6th August 1991. This is regarded as an important milestone because it announced the available of the WWW to the world.

Though Line Mode was the first multi-platform web browser, it was text-only and could not display images. The explosion in web usage is attributed to NCSA Mosaic created by Marc Andreessen and others. In addition to bringing text and images together, the Mosaic graphical browser was available for all popular operating systems of that time.

This, however, did not last very long and by the beginning of the new millennium, Netscape was virtually wiped out by Internet Explorer. Microsoft bundled their browser with their operating system which had close to 90% share of the desktop market. That was the end of the First Browser War.

The Second Browser War started after the launch of Google Chrome on 2nd September 2008. By 2012, Chrome had overtaken I.E.

Amazon.com was launched by Jeff Bezos on 5th July 1994. It was originally an online book store but quickly expanded its inventory. The site now sells virtually everything under the sun.
FYI, the company was founded as “Cadabra” (from “Abracadabra”); the name was later changed. [Source]

Hotmail was launched by Sabeer Bhatia and Jack Smith on 4th July 1996 making it the oldest free web-based email service in the world. The launch date was chosen carefully, as it signified “freedom from ISP based email”; the fourth of July being the US independence day. [Source]

Yahoo’s free email service was launched a year later on 8th October 1997. It was derived from Four 11’s RocketMail, a company Yahoo had acquired.[ Source]

FYI, email had been invented decades back in 1971 by Ray Tomlinson working at ARPA (Advanced Research Projects Agency).

Larry Page and Sergey Brin launched the Google search engine with a simplistic home page and, most importantly, relevant search results. It soon became the chosen destination for searching for information on the web.

Google started as a PhD project of founder Larry Page at Stanford. Page was joined by Sergey Brin and the two quit the university to start their company.

The dot-com boom-n-bust was an important period especially because it led to ‘maturing’ of the web. It started in early 1999 with the share prices of any “e-company” going through the roof. When the ‘bust’ happened, several companies like pets.com crashed, while others, like Amazon.com, persevered and later thrived.

Jimmy Wales and Larry Sanger launched Wikipedia on 15th January 2001. It is now regarded as one of the most trusted sources of information on the web. FYI, Wikipedia came out of another project – Nupedia. [Source]

Developers Matt Mullenweg and Mike Little modified an existing web-suite called b2/cafelog and released WordPress. It was written in PHP and used MySQL database. We regard the launch of WordPress as an important milestone because is now used on the majority of web sites and blogs.

Facebook was launched by Mark Zuckerberg and others from a dorm room at Stanford University. The social networking site soon became extremely popular leaving all others behind. Google, the search engine giant, had to pull down Orkut in September of 2014 because its subscriber base kept on dwindling. [Source]

MySpace, the site that made social networking such a rage on the web, had been founded a year before, on 1st August 2003. It now exists on a very small scale. [Source]

YouTube’s first video, with the title Me at the zoo, was posted on 23rd April 2005. It had Jawed Karim standing in front of an elephant cage at San Diego zoo. The company was founded by three former Paypal employees – Jawed Karim, Chad Hurley and Steve Chen on 14 February 2005.

The first tweet, just setting up my twttr, was posted by founder Jack Dorsey while testing Twitter. The micro-blogging web site now ranks in the top 10 web/mobile services in the world. [Source]

Note: The important WWW milestones listed here define how it is being used today. They cover more that just the history of technologies that drive the web (that would be very nerdy and extremely boring boring). Anyway, we understand that there would be other important events and would love to know what you think. Please post your comments below. 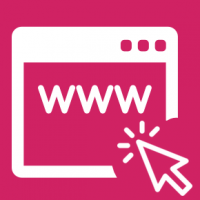 What is the difference between web site address and domain name?

A feature on the Kindle 5 measures reading speed and can inform you when the chapter or the book will be finished. [more...]